I was sitting on the toilet in the bathroom, staring down into the abyss of stark white nothingness…again. I willed myself to see a second line. I crossed my eyes, I held up a light, and I even used the alabaster cabinets hanging above my head as a comparison. I probably looked like a crazy person, but I was years past caring about anything as inconsequential as whether or not I had lost my mind.  Hell, I knew I had lost it. I had become nothing more than a singularly focused and obsessive “peeing on a stick (POAS)” addict. Yes, you heard me correctly. “Hello, my name is Samantha and I cannot stop taking pregnancy tests.”

At this point, my husband and I had already been trying to conceive (TTC, for those in the know) for three years. I had already undergone surgery and we had previously racked up two failed Intrauterine insemination procedures. No, I’m sorry. Let’s make that three now.

My entire life had become about my uterus, which wasn’t awesome because my uterus was being pretty shitty.

It didn’t help that being infertile made me feel like I was the only person who wasn’t invited to the cool kid’s party. When I say that it felt like everyone I knew was pregnant or breastfeeding, it really isn’t an overstatement. It’s like everywhere I turned someone was shaking a tiny person in my face and screaming, “look at my baby!”

Equally not helpful was the fact that it seemed like so many moms acted like they were members of this exclusive club, and my busted uterus didn’t grant me access. I cannot tell you how many times I have heard the phrase, “You don’t have kids, you wouldn’t understand.”  Another good one…”You don’t have children, do you?”

First of all, thank you so much for your kind reminder of my infertility. Secondly, you are probably right, Deborah. I’m sure I couldn’t possibly understand that children get cranky when they are tired, because I am not a mother. My infertility obviously means I have never once encountered a child in my whole life. How does this whole baby thing work? You just keep it in a kennel when you go to work, right? Why are you giving that me look? I swear I’ll put formula in a bowl on the floor!

I’m sure you get the point. I was stressed. My entire world now revolved around having a baby, and since that obviously wasn’t happening, I was hopelessly depressed. It was all consuming, and it was easy to get lost in my despair.

It is strange to have grief without a tangible loss, though I am more certain than ever before that the darkness we were fighting though back then was grief.

I didn’t think anything could pull me out of my darkness. I just assumed I would fall deeper and deeper until there was nothing left of me.

I was wrong. Something did pull me out, but it wasn’t what I had expected.

Perhaps it was my own sense of self-preservation and the certainty that if I fell any further into this black hole, I would never be able to climb out.

I got up from the toilet, I threw the negative pregnancy test into the trash and I left the bathroom, a new faint but distinct resolution forming in the back of my mind: I was going to get pregnant, or I was going to see the world.

A month later, I was jolted awake by agonizing pain. The cramps were severe enough to leave no doubt in my mind what they meant; our fourth IUI had failed. I cried in bed for a little while, but eventually I got up. I wandered in a fog into my office (the room we had appointed as our eventual nursery) and I started booking hotels.

I began drafting our itinerary in a brown leather-bound notebook. It felt cathartic to write it all out, even though I would make numerous changes before everything was finalized. By the end of the day, I had booked nearly every hotel we would need for our two-week trip abroad, and I felt happier than I had in a very long time.

A baby would be an amazing adventure, but it wasn’t the only adventure left for us.

I was sitting on train crossing through the Scottish Highlands, a notebook perched on my lap; my pen poised. We were rolling through the town of Blair Atholl, and the Scottish Gaelic name, Blàr Athall, was clearly marked as we passed through the station. I managed to tear my gaze away from the rolling green hills, the glistening blue waters of the numerous lochs, and the sheep (oh the sheep), long enough to jot a few words down in my black leather Harry Potter notebook:

“Travelling really gives you a sense of how large the world is – how small you are in it all – and how amazing it is that you get to be a part of something so big and beautiful.” 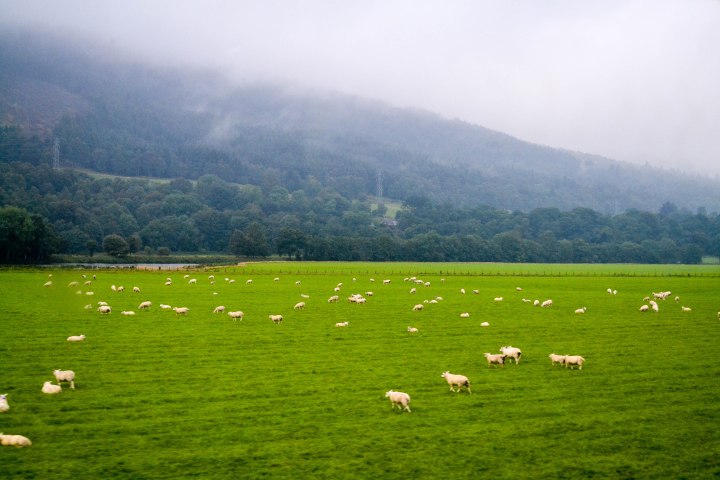 Something special was happening to me, and for the first time in as long as I could remember, I was beginning to feel whole again.

Infertility, and the lack of a second line on a pregnancy test, was not going to swallow me. Not today…not while there was a whole world to explore.

8 thoughts on “Infertility…and Finding an Adventure”

There was an error retrieving images from Instagram. An attempt will be remade in a few minutes.